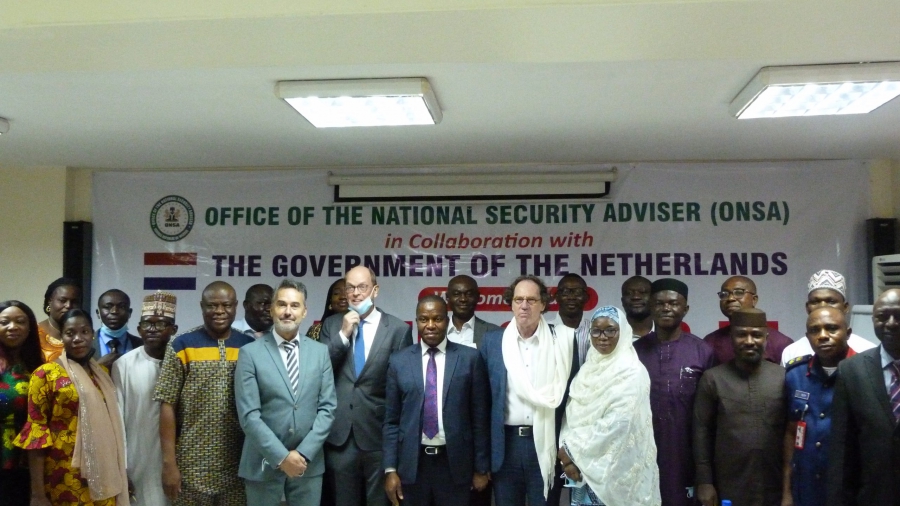 The Office of the National Security Adviser (ONSA) in collaboration with the Government of the Netherland is holding a 3-day Masterclass themed: ‘Strengthening Nigeria’s Implementation of the Policy Framework and National Action Plan for Preventing and Countering Violent Extremism,‘ in Abuja.

The workshop which drew participants from various strata of the society commenced on Wednesday 20th October, 2021 and is expected to close on Friday 22nd October, 2021.

Speaking at the opening ceremony, the National Security Adviser (NSA), Maj. Gen. Babagana Monguno (rtd) expressed the commitment of the Federal Government to strengthen its collaboration with critical partners worldwide towards addressing the menace of terrorism and violent extremism in the country.

Monguno who was represented by the Coordinator, Counter Terrorism Centre, Office of the National Security Adviser (ONSA), Rear Admiral YEM Musa, noted that the training was designed to further stimulate the existing collective and collaborative efforts of the Government of Nigeria and partners towards ensuring peace and stability in the country.

“This workshop is borne of the harrowing experience caused by the non-state armed groups who have continued to unleash terror, killing innocent citizens, as well as the untoward activities of these insurgents and the terrorists group particularly in the North East of the country which have to a very large extent, debilitated economic activities in the country and led to the displacement of people and communities,” he said.

According to him, “It is not in doubt that the take-away from previous Masterclasses organised for Senior Officials of the Government of Nigeria and State Governments in collaboration with the Government of Netherlands have had huge impact on our national efforts to addressing and combating violent extremism at different levels in the country. In fact, the calibre of senior officers of government that participated in these past episodes of this Master Class are much better informed in the implementing the Policy Frame Work and National Action Plan for Preventing and Countering Violent Extremism (PCVE).”

The NSA added that as a nation which has experienced challenges in combating terrorism and other forms of extreme violence and their devastating effects, Nigeria has realised that Kinetic approach alone cannot adequately eradicate the threat, therefore, the Government has also adopted a non-kinetic approach by developing a Policy Framework and National Action Plan for PCVE.

The Policy Framework, he stressed, recognises the integrated roles of government agencies with the larger society as critical by adopting a “Whole-of-Government and a “Whole-of-Society approach.

He reiterated that the workshop was not only well-timed but also of a very consequential and momentous impact on Nigeria owing to the recent development in the country where repentant insurgents are laying down their arms in large numbers and coming out from the hoods in prodigious numbers too. “It is therefore, opportunistic for all participants at this occasion to take advantage and leverage on the exchanges that would take place in these few days to further help in addressing the issue of terrorism in the country,” he stated.

Monguno expressed the Federal Government’s appreciation to the Delegation and the Government of Netherlands for their unalloyed and unwavering support for Nigeria in the fight against terrorism and violent extremism.

In his remarks, the Ambassador of the Kingdom of Netherlands to Nigeria, Harry Van Dijk noted that Security was very strategic and critical for national development. He therefore pledged the continued support of his country for Nigeria to overcome the challenges of insecurity in the country.