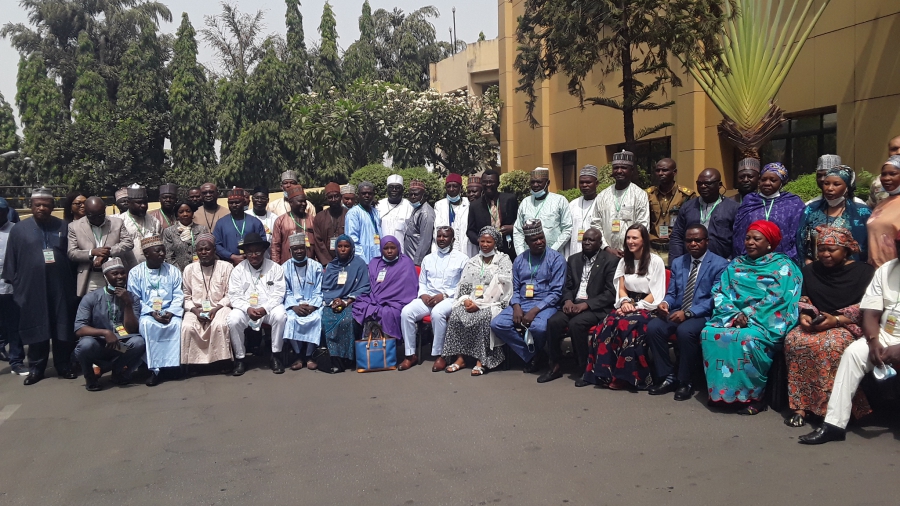 The Office of the National Security Adviser (ONSA) in collaboration with the National Orientation Agency (NOA), Operation Safe Corridor (OPSC), supported by multiple partners including the International Organisation for Migration (IOM), held a-4-day Workshop on Strategic Communications for Disengagement, Disassociation, Reintegration and Reconciliation (DDRR) processes in the Northeast Nigeria for government officials from Tuesday 8-Friday 11 February 2022 in Abuja.
In his remarks, the National Security Adviser, Major General Babagana Monguno (rtd), represented by the Coordinator, Counter Terrorism Centre, Office of the National Security Adviser, Rear Admiral YEM Musa noted that the Workshop was necessitated by the need for accurate dissemination of information to Nigerians and the International community at a time the nation is witnessing a mass defection of ex- Non- State Armed Groups (NSAGs) to the society.
“This Workshop provides an opportunity to obtain recommendations and next steps for the dissemination of the Communications Plan in DDRR and Preventing Violent Extremism (PVE) developed by IOM and other UN agencies as being implemented by the government of Nigeria, under ONSA’s coordination,” Monguno said.
The NSA stressed that the Northeast has been stirred by a violent conflict and the presence of Non-State Armed Groups (NSAGs), namely Boko Haram, in the past decade. According to him, beyond disrupting local communities and fostering an atmosphere of fear, these NSAGs have led to the mass displacement of civilians both within Nigeria, with over 2.9 million internally displaced people (IDPs), and to neighbouring countries, with some 360,000 refugees that had fled to Niger, Chad, and Cameroon. The activities of NSAGs have also undermined local economic structures and an already underperforming labour market.
He added that the Government of Nigeria (GoN) has recognised the limits of a purely military solution to the conflict and sought to adopt a more holistic approach, granting importance to elements of strategic communications and sensitisation. Priority has been given to activities intended to support the reintegration of former associates of NSAGs and to restore social cohesion at the local level.
“To this effect, the President of Nigeria enacted the Policy Framework and the National Action Plan for Preventing and Countering Violent Extremism in 2017 and revised the country’s National Security Strategy accordingly in 2019,” he reiterated.
The National Security Adviser, on behalf of the Nigerian Government appreciated the support of all the UN agencies, particularly, the International Organization for Migration (IOM) for championing the ongoing implementation of a project to improve the communications strategy related to the rehabilitation, reintegration, and reconciliation processes.
Also in the remarks of IOM Nigeria Chief of Mission, Franz Clestine, represented by the IOM Nigeria Disengagement Disassociation Reintegration and Reconciliation (DDRR) Programme Manager, Maria Quintero hinted that “This strategic training workshop is the last and final phase of the Communications for Defections and Reintegration project implemented with the support of the US Department of State and the Bureau of Conflict and Stabilisation Operations (CSO) in Nigeria.”
According to him, the project is inscribed in the framework of the DDRR Action Plan, adopted by the Office of the National Security Adviser (ONSA), the Ministry of Justice and the Defence Headquarter in 2017; adding that the project has a broader scope as it has aimed to support the Government, and especially the Office of the National Security Adviser, in its efforts to prevent violent extremism and promote DDRR processes.
The 4 -day strategic training workshop which drew participants from Federal and State governments agencies from the Federal Capital Territory and 3 Bay States of Borno, Adamawa and Yobe, centred around enhancing the capacities of strategic government officials to disseminate accurate information with the communities concerning DDRR and PVE policies and implementing strategic Monitoring and Evaluation mechanisms for their communication strategies.