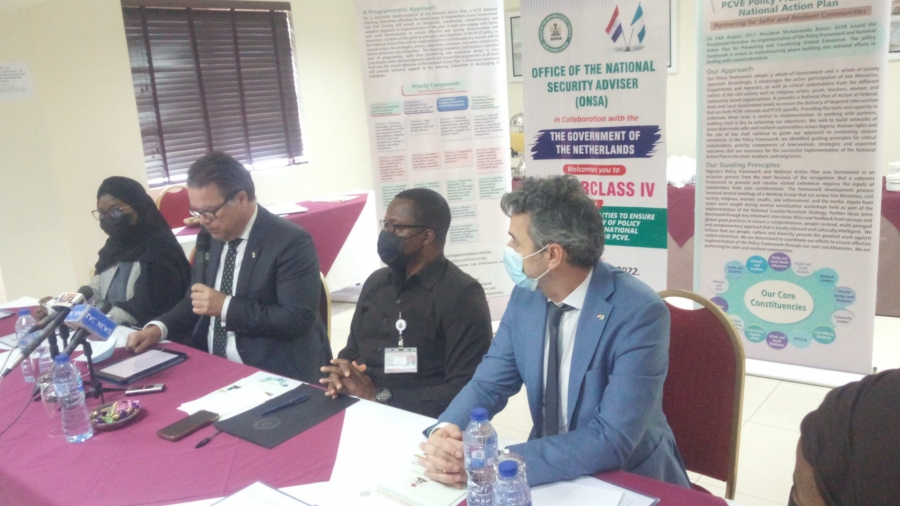 by Raphael B. Towoju News

As part of efforts to further stimulate the existing collaboration between the Government of Nigeria and its partners towards ensuring peace and stability in the country, the Office of the National Security Adviser (ONSA) in partnership with the Government of the Netherlands is holding a Masterclass IV for the Steering Committee on the Implementation of the Policy Framework for Preventing and Countering Violent Extremism (PCVE) in Abuja from 15 to 18 February, 2022.
The objectives of the Masterclass IV are to review the National Action Plan for Preventing and Countering Violent Extremism; to understand and apply key concepts, tools and approaches in decision making and implementation; to strengthen Preventing Violent Extremism Leadership Dialogue across sectors and shape decision making, among others.
Declaring the Workshop open on behalf of the National Security Adviser, Major General Babagana Monguno (Rtd), Rear Admiral Yaminu Musa (Rtd) Coordinator, Counter-Terrorism Centre, Office of the National Security Adviser (ONSA), noted that “the multidimensional nature and complexity of terrorists’ activities require multidimensional approaches involving all stakeholders”
The Coordinator further stated that “the development and implementation of a Policy Framework  prioritize the strengthening of institutions and coordination; access to justice, rule of law, and human rights approaches; engaging communities and building resilience; and integrating strategic communications in PCVE Programmes.” To enhance the coordination of implementation of the PCVE Framework and Action Plan, the Government constituted the PCVE National Action Plan Steering Committee and a functional Secretariat reflecting the broad range of stakeholders across Government and Civil Society according to the guiding principles stated in Part Two of the Policy Framework. The Committee is designed to ensure an integrated, coordinated, comprehensive and adaptive approach in implementation of the plan at various levels of government from national, states and local governments.

The Coordinator said that Master Class 4 was a continuation of earlier ones commencing with Masterclass I held in Kaduna 2017, Masterclass II in Maiduguri 2018 and Masterclass III also held in Abuja in 2021. These series of workshops have been organized to build the capacities of stakeholders for effective implementation of the Policy Framework and National Action Plan for PCVE in the country.

He noted that the Policy Framework for PCVE recognised the integrated roles of government agencies with all stakeholders in the larger society as critical to full implementation of a Whole of Government and a Whole-of-Society approaches to combating terrorism and violent extremism in Nigeria.
According to him, the PCVE Policy encourages the active participation of Ministries, Departments and Agencies of government, as well as critical stakeholders from different sectors of the civil society such as religious actors, youth, teachers, women, law enforcement, the media and civil and community based organisations. “This is essential in order to build networks of peace that create safe and resilient communities across Nigeria, in which human rights and the rule of law guide the approach to combating violent extremism,” he stressed.
The Coordinator also stated that “the Masterclasses were collaborative initiatives designed to directly support the attainment of the four core objectives of the PCVE policy by strengthening institutional capacity towards its implementation.
He commended the Government of the Netherlands for its support to Nigeria in the fight against terrorism and violent extremism, adding that ONSA would build on the gains of the collaboration which have been achieved over time.
In his own remarks, the Netherlands Ambassador to Nigeria, Mr Henry Van Dijk, represented by the Deputy Head of Mission, Mr Ewout de Wit, commended ONSA and team of experts for their commitment to countering violent extremism in Nigeria.
The Envoy said that addressing violent extremism as well as the security challenges in the West African sub-region as a whole was a common task that bound both countries together as well as the international community.
He said it was important for government and civil society to work together towards proffering lasting solutions to combat violent extremism, saying that there could not be development and prosperity without security.
According to him, the Netherlands would remain a reliable partner in this fight, not only in Nigeria, but also in the wider sub-region and the world.